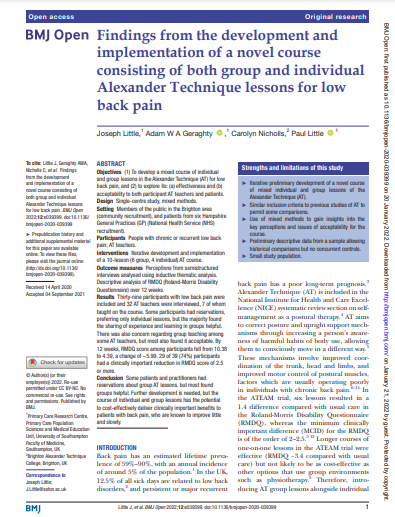 A new study about the Alexander Technique has just been published in the prestigious British Medical Journal.1 The research was led by a team from the University of Southampton, and follows their earlier large-scale clinical trial that demonstrated the effectiveness of Alexander lessons for people with chronic back pain.

This latest research explored the use of combined group and one-to-one teaching, rather than the more traditional method of entirely one-to-one Alexander lessons. Such an approach could make learning the Alexander Technique more accessible for people and more affordable for the NHS.

The study recruited people with chronic or recurring back pain from GP practices or directly from the community. Participants were offered a course of 10 sessions in the Alexander Technique – six group classes (small-sized groups of 4–8 people), combined with four one-to-one lessons – supplemented by a book and downloadable talks for home study. The researchers interviewed participants about their experiences, and impact on back pain was also assessed using quantitative measures that had been used in previous trials. In addition, Alexander teachers were interviewed about their attitudes to group teaching, as well as (for those directly involved) their experiences of teaching the mix of group classes and one-to-one lessons in the study.

This pilot study included 39 people with back pain and the majority expressed positive views about the combined approach of group and one-to-one lessons. Even though some would have preferred exclusively one-to-one lessons, there was a recognition that group teaching had its own advantages, and not just in relation to cost. The interviews with Alexander teachers (32 teachers, of whom 7 taught in the study) also revealed broad support for the approach used. Some teachers had significant reservations about group teaching but became much more positive about the approach used by the end of the study. The quantitative measures in the study were also promising and suggested that larger studies could confirm significant improvements in back pain and associated disability with this approach.

Over the years, the majority of Alexander teaching has been on a one-to-one basis but many teachers have also offered group classes as an option. The primary aim of offering group classes is often to increase accessibility to those who may not be able to afford one-to-one lessons. However, it has become clear that group teaching also has some of its own advantages, including the sharing of experience by participants. It is also pertinent that Alexander teacher training has always occurred in a group setting – so a mix of group and one-to-one teaching is something that our profession already has experience of.

Other research has highlighted the potential of group Alexander teaching across a range of different areas. These include a study of older people with a fear of falling, and another study of people with chronic neck pain,2,3 as well as the examples cited in the BMJ paper. The value of the current study is that it has evaluated one particular approach that has combined group and one-to-one lessons in an attempt to harness the benefits of both.

Any thriving profession is continually engaged in a process of evaluation and adaptation. A new impetus has come with the Covid pandemic which has brought its own challenges but was also an opportunity to innovate. During the lockdowns, many teachers discovered that they could teach the Alexander Technique effectively online – albeit mainly to those who could build on some existing experience of the technique. Now that in-person teaching has resumed, online teaching is not being used so much but many teachers believe that it can still have a role to play to supplement in-person lessons. Mostly, group teaching has not yet resumed. With good Covid measures it is feasible to minimise the risk of transmission but, for many, it still seems premature to go back to group teaching just now.

Looking at the big picture, one-to-one Alexander teaching looks set to remain the mainstay but group work certainly has its advantages. So, an approach that combines the two has promise and is worth pursuing. In the end, it’s a question of continually refining our teaching skills to tailor them to each situation – and that is something that Alexander teachers surely aspire to.