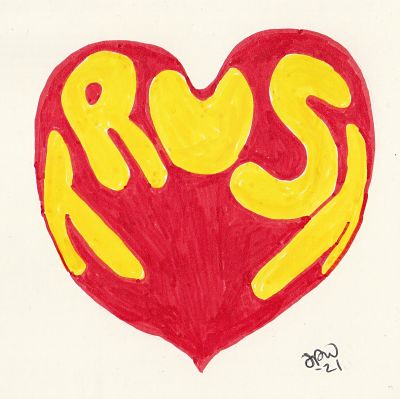 Perhaps, for example, you’re a bit lacking in trust in your balance, health, or ability to make difficult decisions? Trust in all aspects of ourselves is something that learning and applying the Alexander Technique can help us build. This doesn’t mean unwarranted ‘blind faith’ but, rather, a realisation of how we can best make use of our mind-body, physical-mental selves to help steer us through life.

I think I began to trust my whole-self a bit more after a ‘light-bulb moment’ I had during my first year of training to be an Alexander teacher. Just to give a bit of context – I was never any good at sports as a child. I particularly remember standing on the rounders field, limply holding a wooden bat and facing the bowler with some trepidation, knowing she was about to lob a small, hard ball at me. I remember thinking ‘how on earth am I supposed to be able to hit the ball with this stupid stick when the ball is so small and moving so fast?’ (and more often than not, I didn’t manage to hit it). What I realise now is that this failure wasn’t so much to do with any innate lack of sporting ability but to the way I was thinking. I was desperately trying to work out what I thought I needed to do. In effect, I was trying to use my conscious thinking mind to micro-manage and control the movement of my limbs, torso etc – as well as having to coordinate the timing and speed of my movement with that of the ball. As soon as we stop to actually consider it, the idea that our conscious mind should be able to work all that out is clearly ludicrous! Nonetheless, it’s on this basis that most of us go about our lives. So, when we’re learning something new, our pre-conceived, implicit assumption is that we need to consciously figure out what should go where and how and when. Then, when the activity or skill becomes no longer new to us (e.g. riding a bike), we generally stop thinking about it and just leave it to auto-pilot mode (which also has pitfalls). But I didn’t realise any of that at the time.

So, back to my light-bulb moment. I was loving every minute of being on the Alexander training course but I had very little notion of ‘what it was all about’ so it sometimes felt a bit like I was in another, and rather confusing, world. That year, the International Alexander Congress was in Oxford and so I trundled along and attended as many workshops as I could. One of these was on baseball and was run by the American teacher, Missy Vineyard. I didn’t have any interest in baseball, it was just that as a ‘newby’ I didn’t know whose workshops to go to at the Congress and Missy Vineyard was (deservedly) highly recommended to me.

The setting was one of those beautiful old Oxford University College courtyards and we were a curious mix of mostly older Alexander teachers, a couple of trainees like me, and an avid American baseball player. Apart from him, most people said they were there because they’d never been able to throw or hit during sports at school and wanted another chance now that they had their Alexander experience to support them.

The workshop was entirely about applying the basic principles and skills of the Alexander Technique (including giving yourself time, intention, attention, awareness, and seeing in 3-dimensions). There was nothing at all about what might be considered as ‘baseball technique’.

It was during the course of the workshop that I suddenly realised I’d been getting it all wrong. My conscious, thinking mind might be very good at certain skills (analysis etc) but it would simply explode if it had to coordinate my entire self in the act of say standing or sitting, let alone hitting a moving target. Thankfully, our subconscious mind-body selves are perfectly evolved for precisely this and so many other intricate activities. This realisation was so liberating for me – I didn’t have to ‘try’. In fact, all my trying was entirely counter-productive. What I needed to do was to use my conscious mind for my Alexander thinking (being self-aware and clear what it was that I did and didn’t want), and then I could trust in my non-conscious self to sort out the rest.

By the end of that 90-minute workshop we were all hitting the ball straight on and catching with ease – not bad after just a couple of minutes each of having a go. Of course, if we’d wanted to get really good at baseball then we would have needed to practice playing more. On the other hand, practice on its own, no matter how much, is never going to be sufficient, as we need our core fundamental skills to be working well (movement coordination, postural support, balance and our attitude) – and all of this is enhanced through the Alexander Technique.

Humans have an inherent ability for well-coordinated movement, posture and balance but this ability gets rather buried under years of habit, adapting ourselves to the world in ways that allow us to carry on without too much awareness, leaving our minds ‘free for the important stuff’ of life.

Through Alexander lessons we learn how we can use our conscious minds in more productive ways and not in the micro-managing, analytical, interfering way that is usual. These Alexander thinking skills, together with the experiential learning through hands-on lessons, allow us to escape from being stuck in either micro-managing or auto-pilot mode. We can then carry out all our activities with more ease, pleasure and success.

So yes, we do need to trust in ourselves and through the Alexander Technique we can build strong, reliable foundations for that trust.